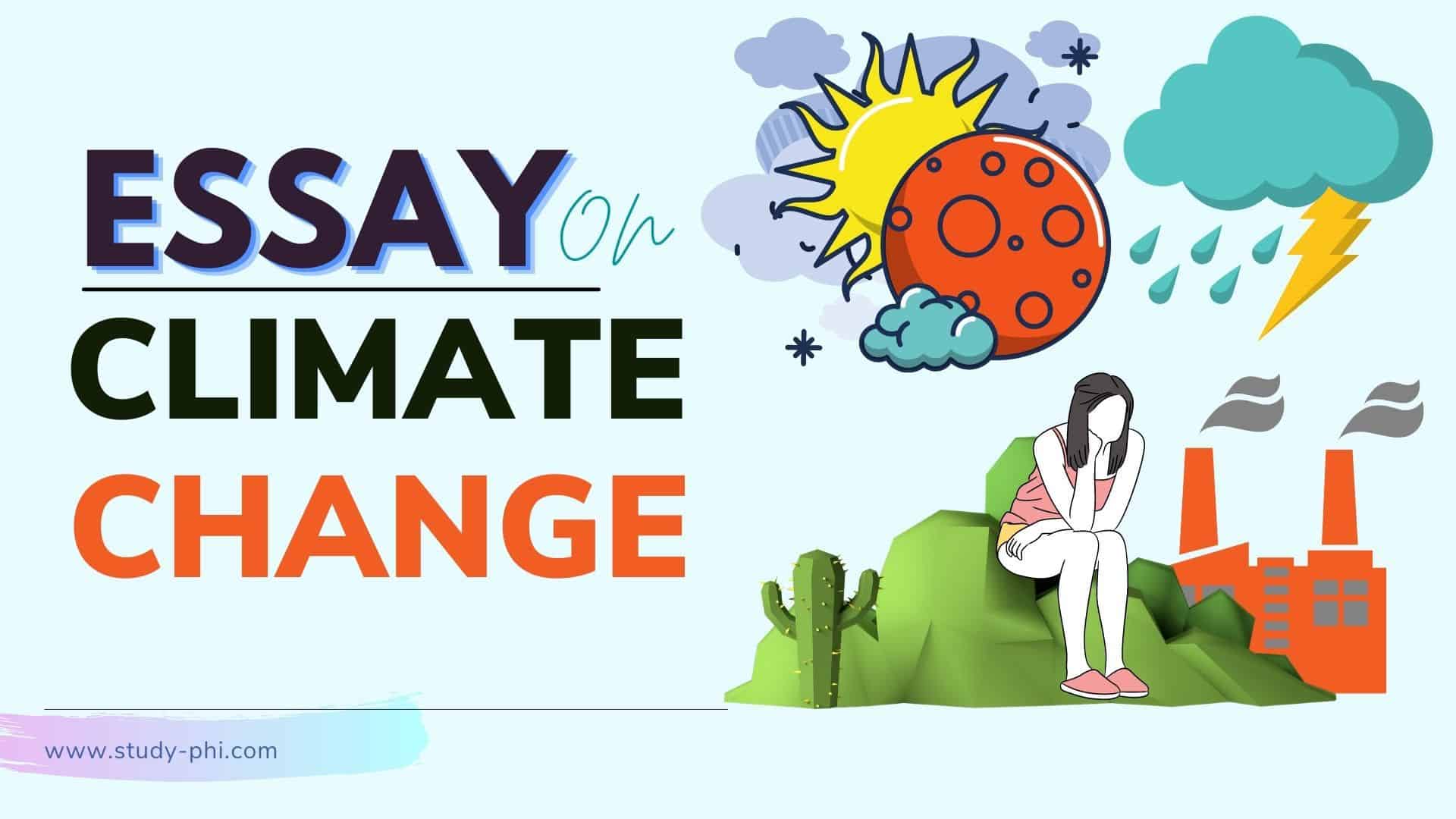 Essay on Climate Change is the topic of discussion among environmental activists and politicians.

The media have been providing coverage for years on the issue of global warming. As well as the rising sea levels and weather changes.

Climate Change, the cumulative effect of pollution and human activity.

It is a major environmental problem that takes a toll on life on the Earth.

This short Essay on Climate Change is for kids who are in class 3,4,5. Written in 10 lines.

1. Climate change is a major global concern that all countries need to work on.

2. Climate change has been caused by human activities with an increase in the emission of greenhouse gases

3. Such as carbon dioxide into the atmosphere.

4. The main effects of climate change are associated with more extreme weather conditions, changes to global ice cover and rises in sea level.

5. There are a lot of people that don’t believe it is real, and many more people who do believe in climate change.

6. The impacts of climate change are already being felt in every region of the world.

7. In many parts of the world poverty rates have increased as a result of extreme weather events, agricultural failures, water shortages, and lack of infrastructure support.

8. But do nothing to change their current lifestyles and habits to reduce their contribution to the problem.

9. Humans are responsible for all global warming and it’s effects.

10. We must take preventive steps to stop this distractive problem.

Now read this 150 words Essay on Climate Change for the students of class 6,7,8.

Climate change is surely one of the most important issues of our time.

The evidence for human-induced climate change continues to accumulate with new studies appearing every day.

In spite of this growing scientific consensus, there remains an ongoing debate over the issue among the general public. Many people are confused about what climate change is and how seriously to take it.

Climate change is the most severe environmental issue which is threatening human survival on the planet.

Climate change is a major environmental problem that everyone knows about. It has been caused due to human activities in the last two decades.

This change will adversely affect climate patterns and intensify natural disasters. If left as it is, the weather will get severe with floods, droughts, storms, and other climatic hazards.

Sooner or later it can cause destruction to the planet earth and ultimately wipe out mankind from the face of this planet.

Read also- Essay on Save Water»

And now finally for this Essay on Climate Change is for the students of class 9,10 in 250 words.

Climate change is one of the biggest issues that the world is facing today. In this essay I will discuss what climate change is, its causes and its effect on humans.

Climate change is the term used for a global phenomenon that is currently happening and may have adverse effects on all living beings on Earth.

The debate over climate change has been one of the most heated in human history. There are scientists, leaders, statesmen, as well as the general public involved in this very important debate.

I am more interested in understanding how the issue of climate change has shifted from a scientific question to an ethical debate.

Climate change is becoming a more and more serious issue. It can no longer just be blamed on the ‘big producers’ of polluted gases, but is also affecting developing countries like India, China and Brazil.

It is up to those who are living in developed countries, like us in the UK, to think about climate change and how we can deal with it.

Climate change is a change in global or regional climates that persists over an extended period of time. it may be a change in average weather conditions, or in the distribution of weather types, or in variability.

Climate change may be classified as endogenous or exogenous.  endogenous change is a change caused by processes within the climate system itself, while exogenous change is caused by external forcings, such as changes in solar radiation received by Earth, orbital variations, volcanic eruptions, and human-induced alterations of the natural world, such as the increase in greenhouse gas concentrations due to the burning of fossil fuels.

1 thought on “Essay on Climate Change”