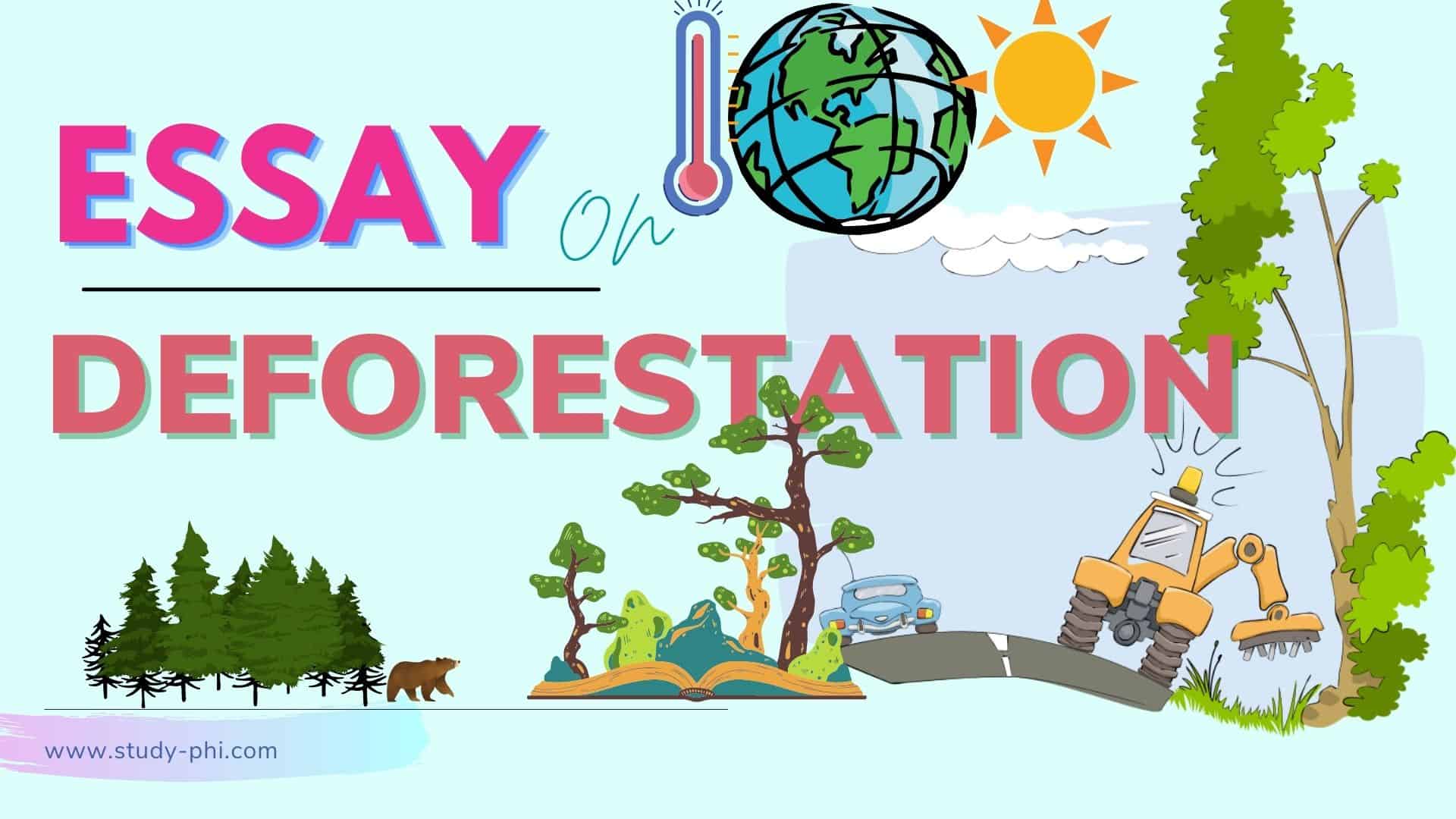 So if you are looking for the perfect essay on deforestation then this is your your right choice.

Here you will get a complete collection of short and descriptive essay on deforestation, from 10 lines to 500 words.

1. Deforestation refers to the destruction of the forests, which are important for all living species on earth.

3. It not only affects the ecology but also affects our day-to-day lives.

4. So we have to plant trees, if we don’t then whole world will be at risk due to various reasons.

5. Although the obvious answer to stop this deforestation is to plant more trees.

6. Deforestation is one of the reasons for the alarming rate at which global warming is taking place.

7. Deforestation can lead to desertification, soil depletion, erosion and ultimately results in a loss of biodiversity.

8. This damages human populations by reducing the food supply and choking rivers and aquifers with sediment.

9. Deforestation represents a major threat to the well-being of the Earth, and ultimately mankind.

10. Now it is our duty to save our earth simply by planting more trees on the planet.

Read this short descriptive essay on deforestation within 150 words. Especially for the class of 6 & 7 students.

Forest plays a significant role in sustaining the ecosystem and economy. Deforestation is the process of cutting down trees and plants that cannot be replaced naturally.

Forests are the source for building, wood products, livestock feed, fruits and vegetables, energy, and medicines. They also provide an environmental habitat for plants and animals that create and support jobs, recreation opportunities, cleaner water supplies, and give places for people to hunt fish. Moreover, forests offer recreational opportunities to people from both urban and rural areas

This process reduces the forest area and its natural beauty. Deforestation has numerous effects on the atmosphere.

Deforestation is a big problem for the environment. Not only because we lose all the trees which help us to reduce gases drastically but also for the soil erosion, destruction of wildlife habitat and other countless reasons.

The government as well as the forests department have taken initiatives to curb deforestation but it seems that is not enough. So we the human beings have to plant more trees to reduce this problem.

Here is an essay on deforestation within 250 words for the students of class 8,9,10.

Deforestation is the clearing of forest on a large scale for commercial purposes, such as farming or constructing buildings.

It is one of the main causes of a reduced amount of forest cover all over the world, including tropical rainforests, which are being destroyed at a faster rate than ever before.

Deforestation has many impacts in and around the area that it takes place. It can affect different forms of wildlife in different ways, depending on the sort of animal or plant species that lived in each area.

Deforestation is currently destroying about 20 hectares of forest every minute. It is making the world a more dusty place and leading to climate change.

It is going to be defined as a significant contributing factor. The deforestation is something which is happening at a very rapid pace and it is happening only because of human reasons. The trees are being cut down for several reasons.

The results on our environment are catastrophic: loss of biodiversity, global warming, soil erosion. Tons of greenhouse gases end up in the atmosphere from fallen trees. It is important to stop deforestation before it is too late for all living creatures on this planet.

Deforestation may also lead to the extinction of some species of plants and animals. Hence, Governments are trying to slow down deforestation and plantation is taking place in many places.

This long essay is only for the higher class students. Written almost about 500-700 words.

Deforestation is the clearing of forests on a large scale. It usually refers to cutting down all trees in a large area.

It can also refer more specifically to the harvesting of trees without burning them.

Environmentalists have been struggling to stop deforestation for many years but it is still occurring. People who are living in very poor communities obviously need to clear forests in order to grow crops or graze their animals.

Deforestation is the clearing or thinning of forests on land for purposes of converting forested area to arable or non-forested uses.

Deforestation can occur for economic activities such as the expansion of agricultural or urban areas, logging, wood production for fuel, due to wildfires, grazing or the spread of plantations.

Golf courses are found to be a large contributor to deforestation worldwide.’

Deforestation is the cutting or clearing of forests in order to use the land for agricultural or residential purposes.

Deforestation happens due to the need for agricultural land, cattle, and feed crops to produce food for livestock or grow industrial crops such as palm oil, soybean, and sugar cane and also to expand cities for increasing population In order to meet the ever-rising demands of industry for raw materials.

Every year, thousands of acres of rainforests are cut down and destroyed. Much of it is for the greed of palm oil plantations and other commercial operations. With over 100 species being threatened by deforestation, it?s up to consumers like you to take a stand for the rainforests.

There are several reasons behind the shrinking of the rain forest. First, the population is growing at a faster rate than in industrialized countries where people use land for food and other products.

Tropical rain forests provide the world with many goods, such as rubber, oil palms, and hardwoods such as sisal, mahogany, or African teak.

However, it is difficult to turn healthy natural forests into agricultural fields or pasture lands which could in time replace these forests

Deforestation is the permanent destruction of forests and woodlands. It is one of the main causes of land degradation, climate and species extinction.

It causes life-threatening poverty and results in high carbon dioxide emissions, which cause global warming. Deforestation is therefore a key cause of all major global environmental problems.

The most serious global environmental problems are the deforestation,the destruction of animal and plant species ,the acid rain and the climate change, air pollution.

Deforestation has led to serious environmental issues which in turn has increased the rate of global warming. This is because deforestation was one of the major reasons for the release of carbon dioxide into the atmosphere.

The destruction of forest trees caused by deforestation also led to an imbalance in the number of gases like oxygen and carbon dioxide in our atmosphere.

Deforestation refers to the deforestation and forest degradation that occur when trees are cut down. It has several causes, including over logging, land clearing for agriculture, firewood collection, and tree plantation. This destruction has severe consequences for animals and plants of rainforests and the atmosphere as a whole.

Deforestation results in carbon dioxide being released into the atmosphere from decaying wood. As a greenhouse gas, it traps heat around the earth. Over large areas, this leads to other effects such as global warming. In addition, many plant and animal species become endangered or extinct due to loss of forests in their habitats..

Preventive ways of deforestation can help reduce the rate at which countries and regions in the tropics are deforested. Ensuring that parks and reserves are well managed is a step towards this goal.

One method is to have more native villages living in the park or reserve as they have far less impact on the surrounding area than if other settlements nearby were removed.

Another way is to increase public awareness about being careful not to destroy forests, and therefore plants and animals within them.

With the world population increasing rapidly forests are being cut down to a greater and greater extent, but by following some simple rules this should be minimized.

As you can see deforestation is a very harmful disease to the earth.  Deforestation will cause many problems on the planet.

Deforestation ranks as one of the most serious environmental problems affecting our world today.

The most commonly expressed concerns surrounding deforestation focus on economic and ecological issues.

However, there are also many social consequences to the loss of forests that many people do not consider.

1 thought on “Essay on Deforestation”