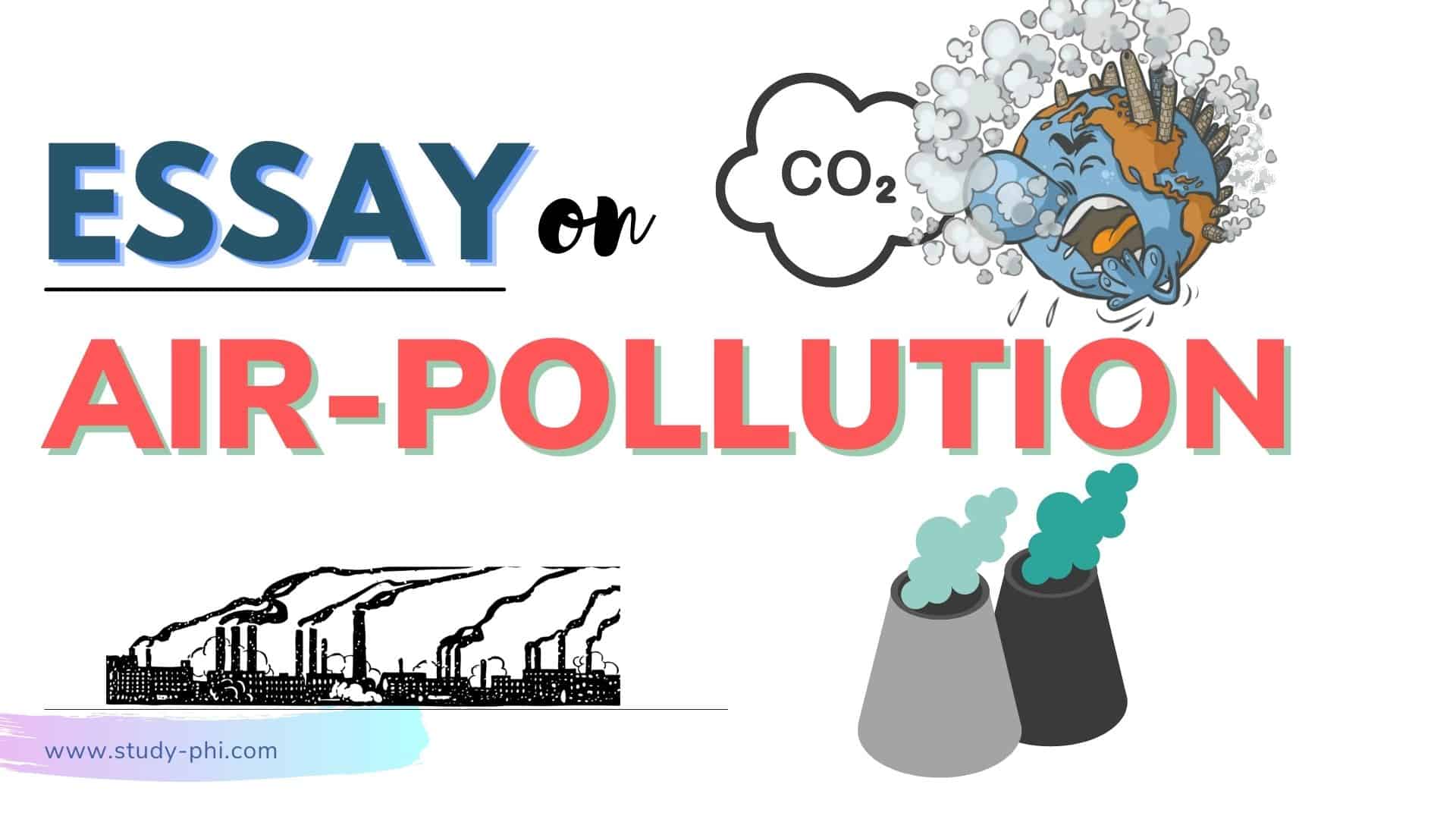 Essays on Air Pollution is the primary subject matter of this post. If you are looking for an essay on air pollution then you are in the right place.

Describing in part wise for specific students within 150,250,500 words.

There are excess people that die due to air pollution. Air pollution brings diseases and also creates health problems.

Air pollution is a huge global problem. You’ve probably heard a lot about climate change, carbon emissions, and the ozone layer, but you may not know as much about air pollution. Many cities around the world have poor air quality. Unless we do something about this problem our children and grandchildren will pay the price.

Air pollution is a complex issue since it encompasses many different types of pollutants, both natural and manmade. It has also been going on for a very long time.

Air pollution is a serious global health problem. In some cities, it causes a large number of deaths. The World Health Organization says that air pollution kills around three million people each year, approximately the same as malaria and AIDS. Most of the pollution comes from sulfur dioxide, nitrogen oxide, carbon monoxide, tiny particles of solid and liquid matter, and lead emissions from gasoline exhausts.

We must look into the matter and try our best to save this planet from pollution. Government should also take further steps to prevent air pollution.

This essay on air pollution is specially for class 8,9,10 written within 250 words.

Air Pollution refers to the presence of hazardous chemical substances in the air or other parts of the environment. This is typically caused by human activities.

Air pollution is a serious problem to both human health and the environment, the main sources of air pollution are the automobile and chemical, metallurgy, mining, and oil refining industry.

Air pollution has become an increasing menace in recent years, adversely affecting the ecological balance and compromising the health of a large number of people.

Air pollution has become a worldwide problem. It is a fact that we cannot ignore. We must come together as one UNIT to take action to protect the environment and our lives. As mankind is continually getting smarter and utilizing the resources provided for us, we find out what is in our surroundings that can be utilized in the right way.

Air pollution can literally be seen in smog and sometimes in the form of haze. Air pollution can also be felt in the lungs when breathing. Air pollution is caused by many different factors including transportation, greenhouse gases, factories, forest fires, and products that will contribute to acid rain such as motor vehicle emissions, industry, power plants, incineration plants and most importantly burning fossil fuels for energy generation.

Air pollution is one of the most pressing global discussion topics. With the current environmental crisis that our planet is facing, pollution needs to be reduced drastically. Only then will we be able to survive on this planet.

This is a long descriptive essay on air pollution for higher class students, around 350-500 words.

Air pollution is a big issue in almost every country. It does not only cause damage to the natural environment but also to our health and wellbeing. It is, therefore, important for all of us to be aware of the causes of air pollution and how we can reduce its harmful effects on the environment.

Air pollution is a very important subject that has received much attention over the years. Almost everyone can agree on the fact that we must clean up our environment. Our natural environment is a critical part of what makes our country a great place to live. The government and the people have taken many different approaches to this issue.

The solutions that we find are not always easily achievable or affordable, which makes air pollution and the health problems that it causes one of the most complex problems we face today. “Some who are the most reckless and arrogant cannot tolerate the slightest discomfort. We must take action because we are putting our health in jeopardy by breathing in these harmful contaminants in our air.

What is air pollution?

There is a general term called air pollution, but the problem is it has different meanings according to different people. The common definition used by the US Environmental Protection Agency is “the presence of suspended particles or gases in the air.

In the 1980s, the agency began to use particulate matter (PM) as its primary pollutant, which refers to any particle less than 2.5 micrometers in size.

In 2001, the US EPA changed its definition of air pollution to include CO, ozone, NOx, and VOCs, which are compounds in solids, gases, or liquid that can produce an aroma, odor, or taste.” Air pollution is present in all cities around the world, and most people who are exposed to it are in fact breathing in tiny tiny particles that can be found in vehicle exhaust, burning fuel, and dust.

Air pollution results in respiratory symptoms. It is also linked to serious diseases including chronic obstructive pulmonary disease (COPD), stroke, heart disease, asthma, bronchitis, emphysema, and other lung diseases. Poor air quality can trigger migraines, aggravate asthma, inflame the lining of the lungs and worsen bronchial asthma. Some harmful chemicals in the air affect the brain’s chemical balance, causing neural problems, such as anxiety, depression, and sleep problems. Even a small amount of air pollution can lead to an increased risk of developing Alzheimer’s and cancer. Injuries from pollution Long-term exposure to air pollution and other agents associated with it can cause a range of physical illnesses such as heart disease and stroke.

1. Reduce car use – we use cars to go to work and school the question is can we reduce the number of cars and traffic? By using public transport. Can we reduce air pollution? 2. Switch from old, dirty cars to the latest models – just changing the internal combustion engine. Do we need to switch from petrol to electric vehicles? 3. Reduce road and industry pollution – coal, diesel and other oil-based fuels are a very big cause of air pollution. We should stop burning them in our homes or on our streets.

So these are all essays on air pollution, we try our best to cover all student’s needs. And we hope we did that very well.

Feel free to share your thoughts and suggestions. We will be happy to hear you.